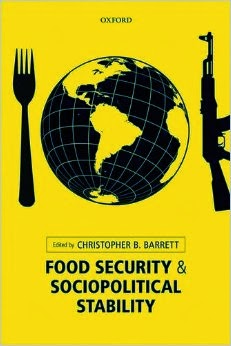 Global food price spikes in 2008 and again in 2011 coincided with a surge of political unrest in low- and middle-income countries. In some places, food riots turned violent, pressuring governments and in a few cases contributed to their overthrow. Foreign investors sparked a new global land rush, adding a different set of pressures, and the spectre of widespread food insecurity and sociopolitical instability weighs on policymakers worldwide. \’Food Security and Sociopolitical Stability\’ edited by CB Barrett represents a critical and timely contribution to food policy and global security discourses and a launch pad for political action. Read my review of it here.